Everything Bagel seasoning has exploded on the shelves (for good reason- YUM!) but if you are trying to keep your salt intake in check, you might be nervous to try it. Make this Low Sodium Everything But the Bagel Seasoning Recipe and get ready to use it on EVERYTHING!

All the flavor- sans salt. It is possible.

What Is In Everything Bagel Seasoning?

To make 9 tsp of this Everything But the Bagel Seasoning Recipe, Mix:

It all goes in an air tight container and you can use it for up to 2 months (but I promise it won’t last that long!).

My favorite part about this seasoning is how many ways it can be used to add amazing flavor to so many foods!

Oh, and I almost forgot, to make Everything Bagel Hummus!

If you are watching your salt intake, choosing low sodium seasonings can be a key part of your plan. The serving size of a lot of seasonings is 1 tsp or less and many of them can be packed full of salt.

Being that 1 tsp of pure salt is 2300 mg of sodium (as much, or more, then we should have in one entire day) it’s easy to go overboard when using traditionally bought seasonings.

One tsp of this everything but the bagel seasoning recipe has only 66mg of sodium (or 3% DV). If you want, you can completely omit the salt too- the flavor is still on point without it!

That’s quite a difference!

Did you make this Everything But the Bagel Seasoning Recipe yet? 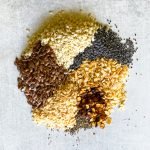 Low Sodium Everything But The Bagel Seasoning

Love Everything But The Bagel seasoning but don't love the high sodium content or the price tag? Make your own low sodium version at home to enjoy on a variety of foods without the extra added salt!
Prep Time3 mins
Total Time3 mins
Course: Snack
Cuisine: American
Keyword: seasoning
Servings: 9 tsp
Calories: 12kcal

Not ready to make this Everything Bagel Seasoning recipe just yet? Add it to your favorite Pinterest board to save for later!

Follow along with Eating with Heart on Your Favorite Platform!